Finally!  I just finished a project I've been working on for several weeks..  I took my time, tried for perfection, and I'm pretty satisfied with the results.  Except...

I'm so over it.   I really didn't expect to feel that way with this particular project - when I first began it, I was thinking it might be one of my best designs so far, that maybe I could enter it in QuiltCon 2015 because it was that cool and graphic.  I even had to use math to make sure I had enough material to make it, which took a calculator, an entire afternoon, and scads and scads of paper. But I persevered and remained excited throughout the process.  It's just that now that it's complete, for some reason, it doesn't seem nearly as cool as I thought it was anymore. I don't know if I'm disappointed in the piece itself, or if I'm just DUNZO!

This kind of letdown feeling happens a lot to me at the end of a big project.  I think (and hope, too) it may be because I've been so obsessed with it for so long, and it takes so much energy, drive, and time (not to mention patience) to make it happen, that when I'm finally finished I think "Eh.  Is this what all the fuss was about?" The piece itself is exactly as I pictured it, it looks just like the sketch, which I adored and could hardly wait to get started on, so what's my problem?    Do I need the damn thing to suddenly animate and dance a jig while singing 'I feel pretty, oh so pretty...'  or give me a hug and say, "Thanks for creating me, Mom."

It's not as though I don't like it, I really do.  I still think it's cool and graphic, and I may still enter it into a quilt show or two, but I don't get that thrill I got from it every time I successfully added a group of lines to it.

The fault doesn't lie with the finished piece, it's mine.  I am, I suppose, all about the creating, not the creation.  What keeps me going is the creating itself, and even though I may like or even love what I create,  I  I just don't need it anymore, I guess - I'm already moving on to the next idea.

Poor art!  Its's a good thing they don't have feelings - I'd be like the Octo-Quilt Mom - once I have the things, I don't really want them anymore.  At least not for a while. The good news is that what usually happens is that I'll set it aside for a while, and then when it hasn't been in my face, clamoring for my attention in a while, I'll see it with new eyes, and I'll fall in love with it all over again.  Or not.  I learned a lot during the creation of this piece, as I do everything I create. It's now a part of me, and I may use the information again the exact same way, or I may "tweak" it next time - who knows?  It doesn't really matter, because it's all about the journey, anyway.

So "Au Revoir" quilt, into the finished pile you go.  I'll know after you've been away for a while if I still love you the way I thought I did. 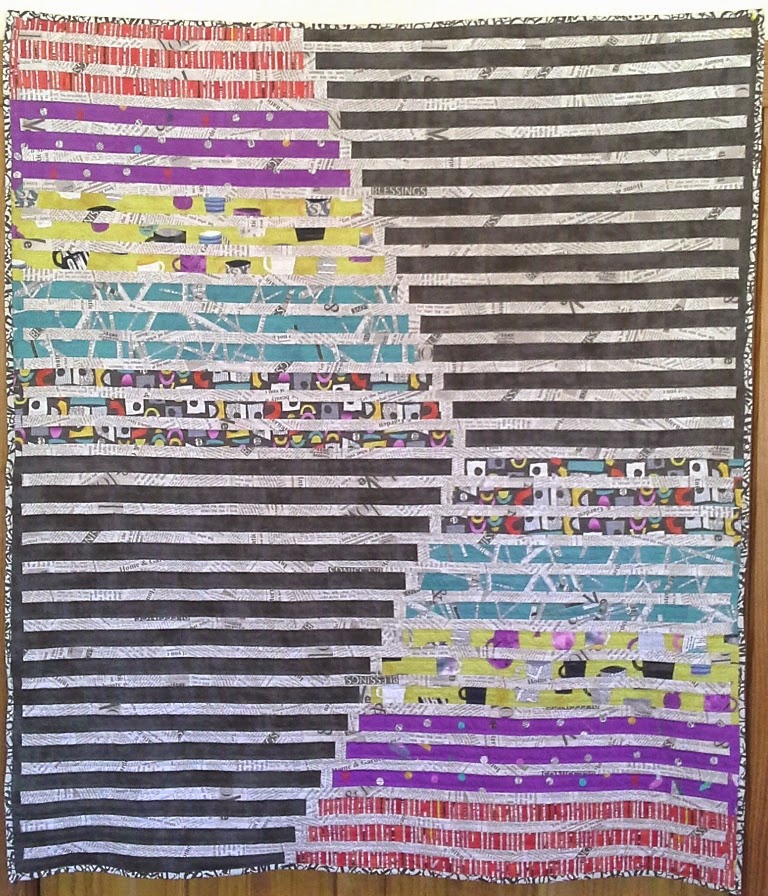 It's called "Read Between the Lines."  And see - it's worthy! (Don't want it to have poor self esteem.)