It’s true - good things come to those who wait!

I can't believe it, but I’m nearly finished with the commissioned piece!   Once I calmed down and summoned my “inner Zen,” I was able to figure it out.  And no, it wasn’t easy – I had to construct it in small pieces, and there was a great deal of tearing out and redoing because the white section had to completely match up and be perfectly (well as perfectly as I could possibly do it) aligned as well. But as it turned out, it was doable, which I knew it was, really.  But frustration happens sometimes, you know?


I just needed to take a break and remember what all this is about – the journey, not the finished project.  (Although in this particular case there IS a deadline…) 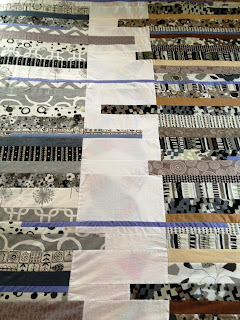 (Here is the part I was having trouble figuring out – how to align the white rectangles vertically and horizontally with the other pieces jutting out into them.)
Next phase was the sandwiching.  Another challenge – at least, physically.  I’m certain I burned at least 500 calories doing it (a bonus!)   I had to clear out my living room to lay it out because a queen sized quilt, as it turns out, is HUGE. Sandwiching isn’t really difficult, but it did remind me that I am old and stiff because it took about three hours to get the backing down and secured, to get the enormous bat down flat, and to pin it.  I’m sorry to admit I had to have a pillow handy because my knees couldn’t handle it!


Next came the ever scary (for me, anyway) issue of how to quilt the thing.  I knew I wanted to go with the linear theme, but did I want to do loops and swirls (which would be fun) or just lines or quilt across the lines in a kind of “vee” shape?  After drawing several ideas, I decided to check out the bridal registry again, just to see which ideas more closely matched the style of the bride and groom.  After perusing the stuff,  I went with a sort of broken line theme.
I feel certain it was the right choice for this piece – simplicity is this couple’s style, and I’m pleased with the way it looks, but it was no small feat to quilt, even simply, a queen-sized quilt on a brother sewing machine with a twelve inch neck!  I see the advantage of a quilting machine now - for sure if one is often making bed-sized quilts!  Even with the extra space in the neck it was rather a challenge to get the monstrous thing though the neck and keep everything straight. So not only am I glad I went with the simpler quilting because I think it it’s the right style, I’m also realizing how challenging it would have been to do the loop-di-loops, etc. and make them perfect.  As it is I’ve done a fair amount of tearing out the straight stitches – can’t imagine how it might have been the other way… Not that I’m complaining, mind you – just noting.
It’s been a really interesting journey from the beginnings of this project to the now almost – finished product.  I’m now trying now to figure out how I want to end the thing – do I want to put a binding on it or do I want to do a knife-edge finish?  I think the knife-edge would look really cool – as if the lines just stop, but since it is going to be on someone’s bed, I wonder if I don’t need to have the sturdier edge a binding creates.  It’s art versus practicality on this one, I think.  I usually opt for practical, but I’ve left plenty of room if I want to do the knife edge, too.  I’m going to let that percolate for a while and see what seems right.


That’s what I love about art – there are always so many possibilities and ideas!  Some people might find that annoying, but I love the endless options – it’s a challenge! I’m not saying I always make the right choice, but I enjoy having several ideas and then sitting back and letting the universal creativity guide me – I know it knows what to do, even when I don’t.  I just have to have faith in it.


Projects like this one are just proof of that. 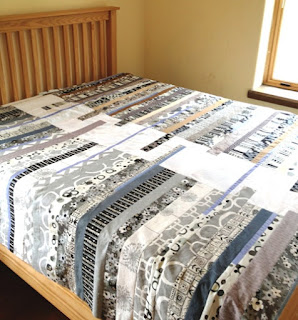 Still unquilted, but I can’t believe how much I like it – even the muted colors!  I’ll try to share a photo when the project is 100% complete – hopefully this week as the deadline is July 6th!
Posted by the zen quilter at 3:56 PM No comments:

Oy! What kind of a Mess have I gotten myself into?

Let me start by apologizing for dropping the ball with my blog for the last eight months.  I started a new job, and life happened, and I just got tired.  But with the advent of spring and exercise, I'm now ready to begin writing again.  I can't promise a post every week, because that would just be a fat lie, so I'm going to just try to post a couple of times a month.  Hope you'll still follow me.  And besides, who really reads a blog every week?  Even some of my best friends admit that they haven't been reading the blog ( catch up, people - I would read YOUR blogs!)   Even though I haven't been writing, I have still been quilting, so I have plenty of stuff to talk about.  (As if I could EVER run out of things to say - that would be a miracle, I am sure.)  So apology made, here goes:
I’m having a problem with my latest project.  It’s my first commissioned quilt.  When I agreed to do it, I was a little trepidacious.  First I was worried about trying to create to someone else’s specifications.  Then I heard about the colors and became even more anxious!  (Dove grey! Beige and tan with a hint of lavender!)  These are colors I have never gravitated towards naturally.  In fact, I’ve never made a quilt that wasn’t pretty much at the opposite end of the spectrum.  But that part’s okay, it’s a challenge, and I relish challenges.


Then there came the fear of pleasing other people with my artistic vision – something I haven’t to date, done specifically.   Up to now, the way it has worked is like this:  I get an idea and it excites me and I create it – it pleases me, and I truly hope but am not overwhelmingly concerned with whether it pleases other people, too.   Also, when someone commissions a piece of art, I would assume the person has something in mind, and that’s daunting, too –what if it’s something they’ve seen that just won’t work with the colors, or something that just won’t work, period?  Worse than that, I might be forced to create something I just can’t get excited about, which would not only be hard to complete, but if I’m not excited about it, then how can I really do a fantastic job, put my heart and soul into it - which, to me, is what makes art come alive.  A scary thought – to have to spend a great deal of time on something I just cannot stand.  Yikes.  Talk about draining the excitement out of creating.
My next concern was that I would have trouble coming up with ideas.  Normally, ideas are not a problem for me – I eat, sleep and dream ideas.  Nope, it’s time that’s always been an issue for me – I have to work, be a mom, a wife, etc. and that leaves very little time for art.  Now I’d been given parameters that are a bit foreign to me, and I want, no - NEED -  the customers to be completely excited and satisfied with the product, but what if I draw a blank for the first time ever?  Or I’m unable “create on demand?”  I’ve never tried before in this type of artistic situation – could be also very scary.  I’m just not sure about this whole commission thing…but I wanted to try, so I sucked up my fears and blew them away with a nice, big bad wolf breath.

Ironically, despite my fears, none of the above things I fretted about are the issue I’m having with my quilt.  I found materials in the requested colors that were perfect and inspiring, I channeled several ideas that excited both me and the clients, who actually let me choose which one to make – even better!

But my knickers are really in a twist because (gulp) I still haven’t figured out how to construct the damn thing!  I’ve got the basics figured out but as it turns out what seemed like a pretty simple design is actually (or should I say naturally in a sarcastic fashion?  No, I won’t say it because that would be snotty.  But I did write it, and I’m not taking it out. J) quite complex and I can’t come up with a good, clean way to put the thing together in a way that 1) pleases me and  2) is actually doable.   I worked on it all weekend, and I haven’t worked it out yet. And while I have freely and without shame admitted in the past that when I get frustrated my language could cause a sailor to blush,  yesterday I really lost it and did the most un-Zen thing I’ve done in a great while – I ripped part of the quilt apart in frustration.  To quote about a million teenagers – OMG!  I was so shocked at my own behavior I stopped quilting and went outside and spent three hours cleaning my car, something I had been dreading doing because it was so frighteningly filthy I couldn’t bring myself do it.  But I clearly needed to regroup, and I hoped that maybe I would have a Eureka moment once I let go and put my mind to another task.


The good news is that now the car is spotless (and by golly, if my son puts his large, stinky feet on the glove box I’m going to slap them down, STAT!) but I still haven’t figured out the quilt!  I’m not too panicked yet, I still have two months to complete it, but still – I don’t know if I’m going to run into other issues , like say, with the quilting (it’s a queen-sized quilt and I don’t have a long arm quilter, for example)  And still some other unforeseen problem could crop up as well – perish the thought!  (And shut up, you neurotic idiot – don’t worry about things that aren’t happening – didn’t you learn anything from the first three paragraphs?  Argghhh!)
So I’m kind of annoyed with my brain, or the god of creativity, or the universe  (or whoever- besides myself, of course- is to blame) for allowing me to dream up an idea but not allowing me to come up with the means to execute said idea.  Not Cool, Creativity!
I’m thinking of standing on my head for a while – maybe an idea with rush into my brain along with all the blood.  I tried yoga and meditation this morning, but nope –still no breakthrough.


So I’m trying NOT trying.  Just having faith that it will come together.  Because deep down I know it will.  I’m not saying there’s going to be an easy solution.  Heck, I’m not even hoping for that .  (As my excellent mother always said, “Carrie, nobody ever said it was going to be easy.”)  No, I’ll happily settle for doable.
When the answer comes, I’ll be ready for it.  In the meantime, I think I’ll practice getting my Zen groove back on.  I fell off the wagon for a moment I suppose.  The great thing is that it never leaves without you, it just patiently waits for you to hop back on and start enjoying the ride again.  Now that’s something to be grateful about.
Posted by the zen quilter at 10:49 PM No comments: