Involving a Lot of Imagination and Many New Ideas

The other day my younger sister Erika came over and I showed her some of the projects with which I'm currently obsessed.  "Oh you are soo creative," says she.  "How do you come up with your ideas?"  My answer was "Everywhere!" "I think you should write a book on the creative process," she continued.  At my strangled gasp she continued, "Fine, I'll write the book. You can just tell me how you do it..."  What amused me about the conversation is that I consider her to be quite creative, more so than myself, and I told her that.  She said "Oh, I can copy other ideas, but I don't come up with them on my own." Our mother used to say the exact same thing.  I disagree with both of them about themselves, it did get me thinking about creativity.

What does it mean to be creative, really?  In the dictionary it says creativity is the ability to create new ideas or things using one's imagination, but I'm not sure I agree with that definition, entirely. I think it's a bit more complicated.

After all, isn't it creative to just make something you like, even if it's a copy of something someone else has done already?  You're still making something - still creatiing, right?  Does it have to be new to be considered creative?  I'm not sure about that...besides, rarely is something an exact replica of something else.  Most people put some stamp of their own on the things they make, even if they don't realize it.

Curiosity and desire, and even discipline are part of creativity as well.  There's that old saying, familiarity breeds contempt, but often it also causes creativity as well.  It's a process - first one starts copying other ideas or things, and then after a while they start to make small changes from the proscribed formula...eventually new ideas start to flow.  It's been my experience that creativity eventually asserts itself into almost any task I am deeply interested in and spend a lot of time doing. Not just the artistic kind, either - one can be creative with almost any task.  But of course one has to have enough of an interest in the thing to want to think about it, to spend time on it, to have the desire to be creative about it - which means in my case, I won't be coming up with a new mathematical theorem any time soon.

I also think it takes a certain amount of fearlessness to be creative - a lack of caring about what others think or say.  My husband has often said when we are discussing how people can be so critical, that it's much easier to be negative about a new idea, or it's much less risky, because you have a better chance of being right - there's almost always someone who doesn't like any given idea or object - but what if you say you like something and no on else agrees with you?  Then you're (GASP) wrong!

But what if you don't care if you're wrong?  What's that saying "What would you try to do if you knew you could not fail?"  Some might call this attitude confidence, others arrogance.  Whatever - it's pretty liberating to not really need approval.  Of course it's great (even helpful)  if other people like what you create, but it's not necessarily a prerequisite for being creative. The world's a big place, and if, like me, you believe we are all connected, you can be pretty sure that someone else out there will like your ideas too.  But even if they don't, it seems to be enough for me (most of the time) that I am satisfied with it.  (I say most of the time, because there's still that part of me that needs some sort of validation to feel that I'm not wasting my time with all this creating...it's there, but it clearly doesn't own me!)

It's undeniably true that some people seem to channel creativity more naturally than others - for whatever reasons.  Maybe they are somehow outside the mainstream, they haven't been formally trained, they have some physical characteristic or disability that makes them go in a different direction than most people, or maybe they have just been left alone a lot with their imaginations and so have a more natural inclination to create.  I personally think that spirituality is very much entwined with creativity.  After all, all creativity comes from that one creative source that created everything (some call it God) and what an everything it is!

I have no trouble accepting and blessing those who are lucky enough to be wildly naturally creative - bully for them!  Because I'm also one hundred percent certain that we can (all) learn to be more creative, to develop our creative skills.  From years of experience as a teacher, I've learned that there's almost always more than one way of coming up with the "right" answer.  Often, there's even more than one right answer - just not on a standardized test (which unfotunately at the moment is taken as the measure of all things educational). Our educational system at the moment is designed to erase any freedom of thought, whether it's new ways to come up with old answers, new and maybe improved answers to old (or new) questions, innovative ideas, even the asking of entirely new questions.  We discourage kids from coming up with any original ideas of their own to the point of stifling or killing most creativity.   Even the art teachers expect the kids to come up with same damn pictures!  It's okay that they might be learning a certain technique, but is it creative to expect them all to make the same thing? NO!

The truly sad result is that we aren't at all preparing our children to meet the challenges that they will face in real life, let alone the looming problems that we ourselves have created here on this planet that need to be solved in order for us to survive as a species.  There simply are no ABC answers to climate change or overpopulation.

The point is, that if we encourage our children to think of their own ideas, if we ask them thoughtful questions and accept that there can be more than one correct answer, if we reward children for thinking their own thoughts and for asking questions, we are teaching them to think creatively.  Of this I am certain.  The good news is that it works for adults, too.  All it takes is a certain degree of openness, a willingness to take a chance.  The unadulterated joy that results from this kind of freedom is undeniable, formidable -- and seriously addicting.  Besides, who knows where it might lead...World Peace, here we come!


ADDITIONAL NOTE:  So I've been in a frenzy of creating lately - I think in the last few weeks I've completed almost a project a week - I can't stop myself.  Some are new ideas, some, like the one below, are old ideas I've had in my head or in my sketchbook for literally YEARS!  What gratitude I have for being able to finally see them come into being! 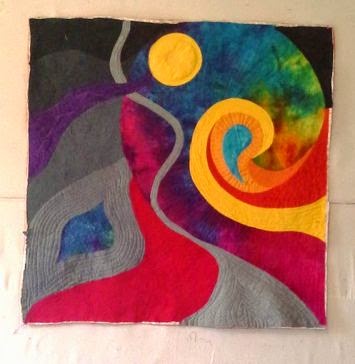 I don't have a name for it but whatever- it's nearly done, I really like it,  (although as usual I am a sucky photographer- sorry it's crooked) and I only started it last week.  I've had an absolute blast making it...but my bulging mind is already going to my next project.  Don't know if that's a bad thing - I mean, I'm absolutely not rushing; I've taken the time to try to get things exactly the way I want them (which in my case often means a lot of tearing out stitches) I'm seriously enjoying the moment, but still  - new ideas are bombarding me, pushing me into action...I can't stop and I don't even want to!  So beware: it's a weird thing, giving oneself over to creativity.  Fun, freeing, exciting, even fulfilling...but definitely, very, very exhausting!

Posted by the zen quilter at 3:50 PM No comments: