How Simple Turns Complicated (aka Stop with the Ideas Already!)

It's been a while, I know. Can't help it - just have so much going on in real life and so little time to be creative. It cannot be helped, but it does make me rather cranky.  However, hooray!  I did get to sew both days this weekend, which was MUY BUENO!  And did I use that time to finish up any WIP's?  Of course not!

I started an entirely new piece!

It started out as a simple design -dark blue to light blue triangles of different sizes going down the middle with smaller, colored triangles on either side. I actually finished that part in one day.  Here is what it was going to look like.  Not all sewn together, but you can get the general idea from this photo (sorry for the poor quality - I took it at night and the studio just doesn't have enough light - note to self to buy a good lamp.  Oh, I already made that note, just have to actually remember to actually DO it!) 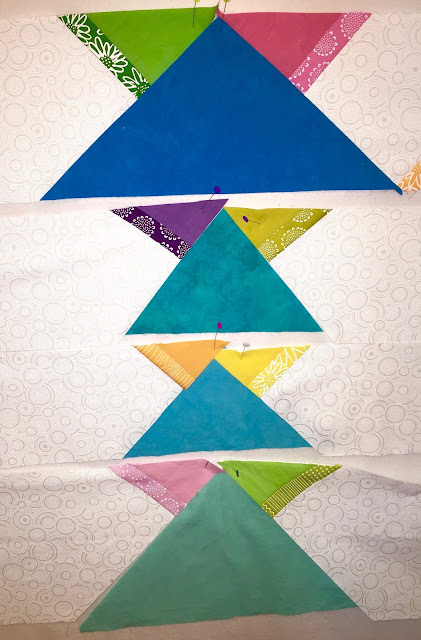 I was going to leave it this way as I liked the simplicity of it, really I was, but then I got another idea. I decided to have ribbons coming out at the same angle as the triangles.  I cut and sewed a few.

Hmm, not so bueno.  It drew the eye away from the center triangles and it looked like bug antennae, which are fine when one is doing bugs, but not not so great in this case.  After sleeping on it I decided to cut the ribbons out, and just leave the quilt the way I had originally planned.  No problemo.  BUT before I got started on removing them, I got another idea - how about flying geese in all the different blues pointing outward along the edges of the ribbons?  I tried it out and yeah - it really worked - all was muy bueno again!

Of course that meant I spent all day Sunday cutting out and making flying geese.  I had decided to use the method that allows you to make four flying geese at once, so I was super certain that I could whip them out in no time and have that baby complete by the end of Sunday - except silly me cut the squares opposite - the way I did it, the geese were going to be white and the "frames" blue - not at all what I was going for, so I had to recut them all.  (Now I have a lot of blue squares which I'm definitely going to make into HST's for another project, so that's not so horrible.  Although I was rather annoyed at the time, if I must be completely candid - and I suppose I must).

All this has turned a simple quilt into a much more complicated one, but I suppose that's what I do best - complicate things.  It really works now, I think. Except for that one thing... 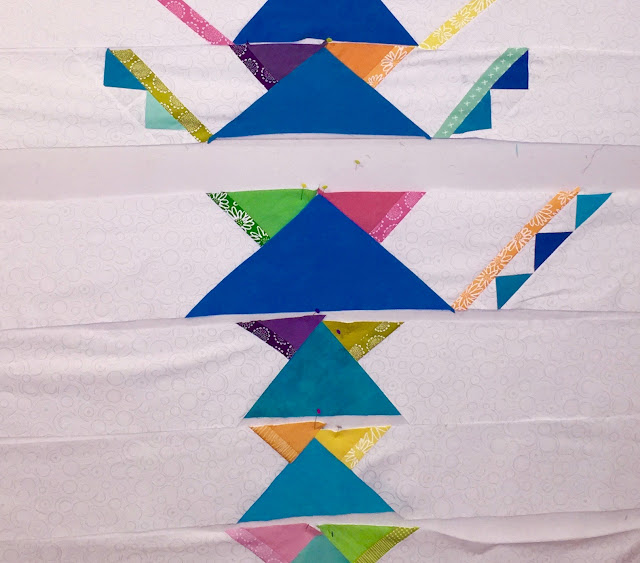 Do you see it? WRONG direction!  Argh!  I knew it was time to quit when I did that.

Tomorrow I may have a little time to work in my studio, so I can fix that mistake and continue on my simple turned complicated quilt journey.  At least I like the direction I'm going, but I admit, sometimes I wish I didn't have so many ideas.

Posted by the zen quilter at 9:54 PM No comments:

It's been a while since I've had time to share, or to blog.  I'm hoping things will be slowing down a little so I can get back to it.  I started this blog not just as an opportunity to share my work, but to explore creativity and other interesting things about life and art, but I've fallen way behind on any kind of deep philosophizing for quite a while.  Today's no exception, either.  But...

I do have two WIP's to share.  One is a flimsy finish which I'm scared to start quilting.  It's a piece that started out as an art quilt and ended up a huge queen-size - yikes!  I really love it but not having a long-arm matchine and being far too cheap to pay someone else to quilt it, I find it a rather frightening prospect to quilt. 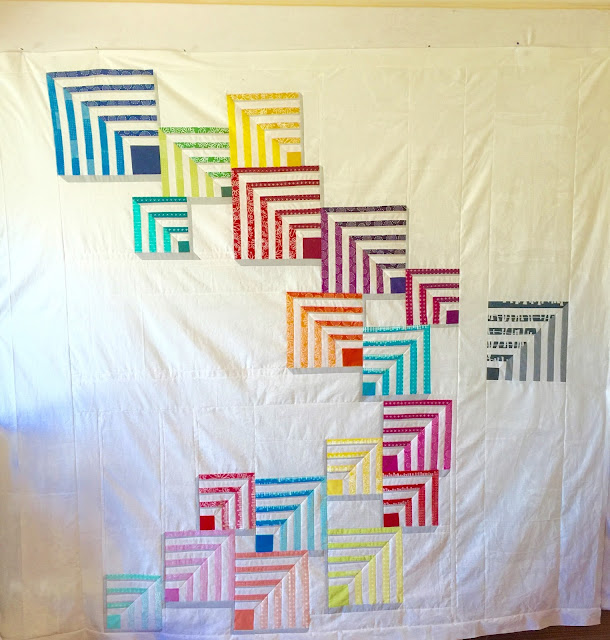 I have no name for it - Boxes, maybe. It's supposed to be sort of an optical illusion.  Don't know if it worked, but I like it anyway.  I was thinking it was pretty original until I realized I had seen very similar blocks elsewhere.  Oh well, as I've said before - at this stage in humanity and with this many billions of people on the planet, it is actually fairly difficult to be completely original.  So let's just say it's original to me and leave it at that. 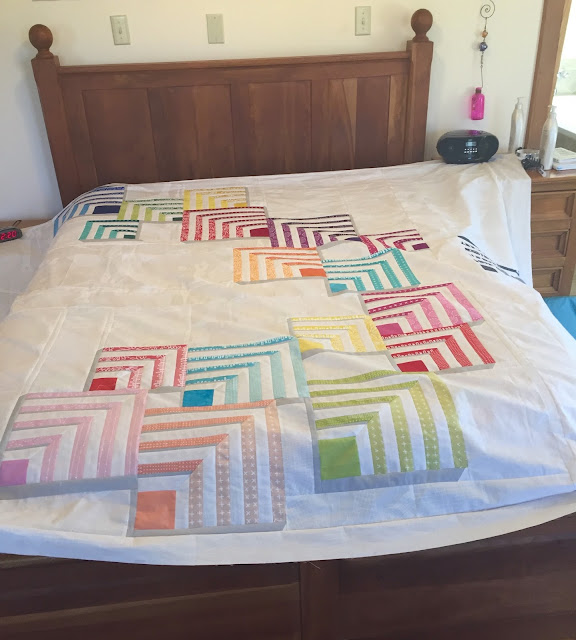 It will be my summer quilt.  I will make another for the fall/winter.  That way maybe both of them will last longer that way, for the sun is quite brutal here in beautiful Central Texas. ( I also could get some window coverings for the long summer days - it wouldn't kill me, I suppose.  But I live in the country and my husband and I really enjoy looking at nature out our windows.  Still - these big ones are a major b*%#h to quilt, so it might be worth it to have shutters or something,  just  for when the summer sun is beating through the west windows...I'll think about it.)

Anyway, the next WIP I have to share is what I'm calling  21st Century Atomic Art.  I love mid-century modern stuff, and I've already made one version of what I call "Modern Atomic Art."  But I came across these sketches in my book and decided I just HAD to make them right now.  I have had a lot of fun, and could easily make more of these blocks, but I'm gonna stop myself because the blocks are huge and I really don't want this piece getting any larger.  I have a kind of fun border idea I'm toying with for it, though, so stay tuned, as they say. 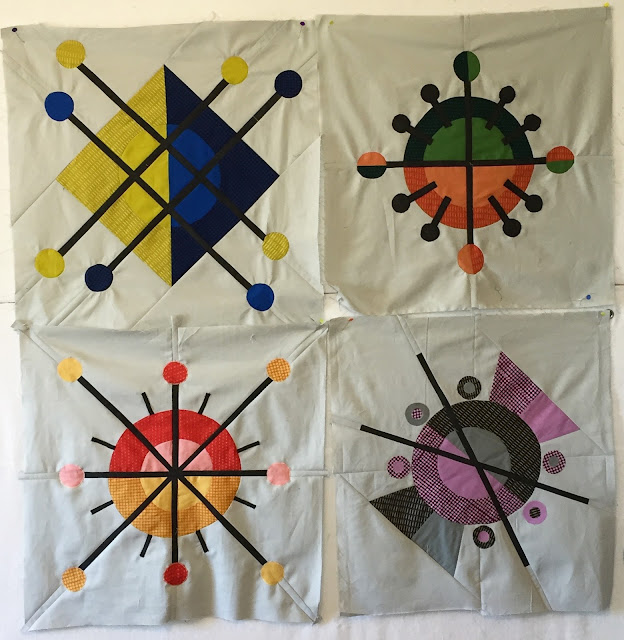 And just for kicks and giggles, here is an actual finish. 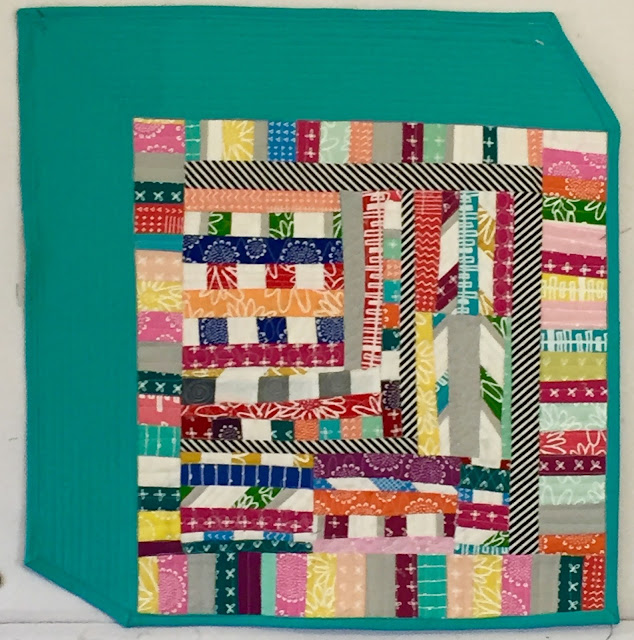 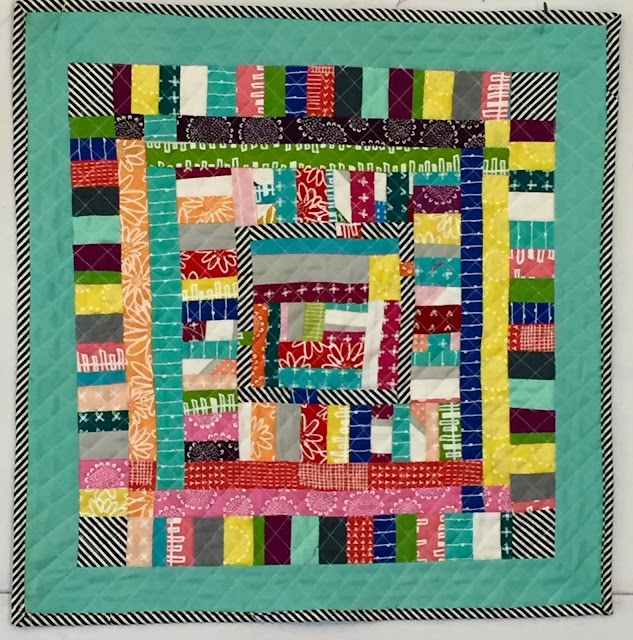 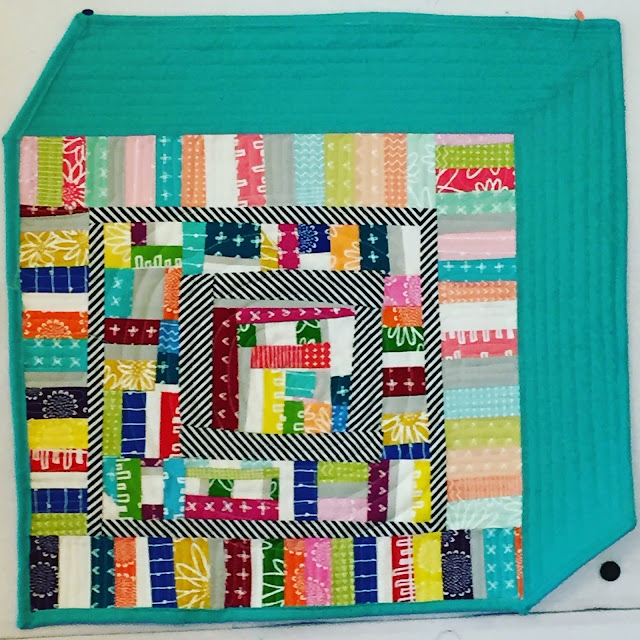 It's made from scraps of the boxes quilt, and I was going to put it on the back, but I liked them so much I made them into minis instead.  (The fabric is the Blueberry Park Collection by Robert Kaufman, btw).  The colors are quite faboo.  In fact,  love them so much that I have two sets of them, actually.  Talk about ridiculous...but my niece wants to make a bed quilt for herself with them and I just couldn't resist making sure there was enough left over for me to make another piece too.  Not that I exactly have anything in mind, of course.  But I will, I'm sure, at some point...

Gonna spend some time tonight checking out all of y'all's work.  So inspiring and fun.  Thanks for sharing, and thanks for stopping by - hope I didn't make it too long.  I am rather long-winded, even by computer sometimes.  (But I like to see it as "full of enthusiasm.")
Posted by the zen quilter at 6:42 PM 1 comment: