To some, it might seem like a waste of time and resources to work on a project that might end up in the depths of the landfill.  While it is indeed a luxury to be able to potentially toss something if it doesn’t turn out (or turn it into a rag, or a doggy pillow, or whatever), it’s also an opportunity: to create without any expectations.  Now, I’ve never been afraid to try new techniques or crazy ideas, but one thing I’ve never done is just sit down and play, without a real idea or a sketch, or even the expectation of the outcome of a finished product.  It just seemed too self-indulgent a thing for "Practical Carrie" to do.

To my mind, going blind into the foray of creation can have three possible outcomes – something totally crappy, something good, or something great.  (Maybe there is also a fourth possibility, which is something truly extraordinary.  One should never rule that out, I suppose.)  But for me, it’s a scary proposition because I am programmed: to NOT waste time, to NOT waste resources, to ALWAYS pursue excellence, and to ALWAYS have a finished product.  So if it didn't seem like a good idea, I simply didn't try it.  But as my husband put it the other day, “Every idea isn’t a genius one.”  So true.  Something else to remember, on the other hand, is that each idea - stupid, ugly or useless as it may seem, carries the potential to lead to something worthwhile. So it shouldn't hurt to try stuff...should it?

Last week I decided to go through my fabric scraps and leftovers and “organize” them.   As I did, I found some squares of fabric that were given to me at QUILTCON last year.  For once having the luxury of time, I decided to play a little.  I put like colors together and began cutting them up and re-sewing them, mixing the fabrics, etc. to create new squares.  I wasn’t exactly bowled over by the results, and since they were free and I didn’t really care about them, I felt perfectly at ease with the idea of just tossing them. So it was out of pure curiosity that  I stuck them on my design wall and played around a little, wondering if there was anything I could do to make them more interesting or likeable, thinking I might just toss them; trying different arrangements and not being one bit invested in actually producing a finished work…

And playing around with them off and on for a couple of days; I ended up with this (not quite finished yet, but wanted to share it anyway): 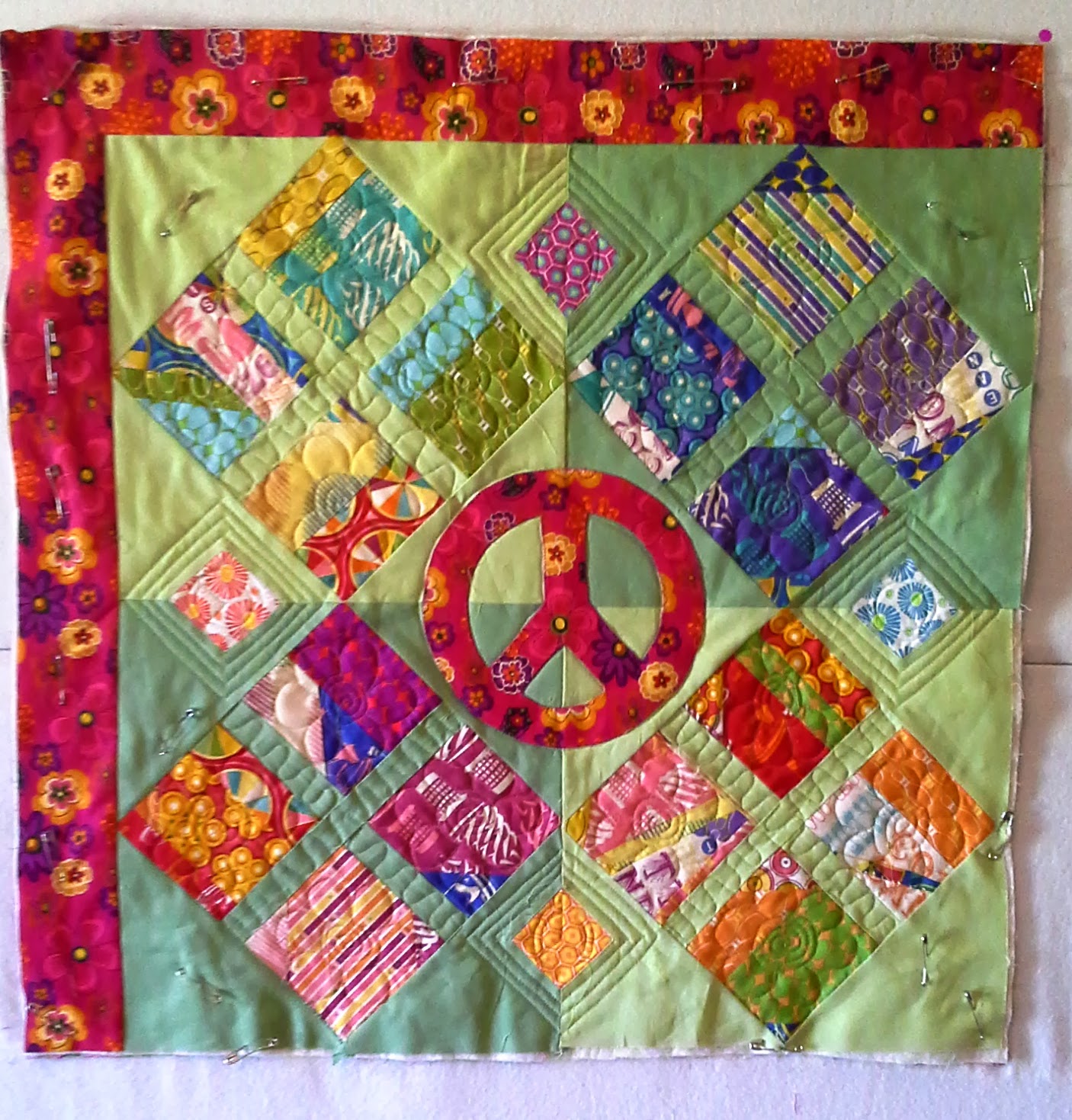 It’s small, and perhaps not too excitingly original, but in the end I think it’s cute and cheerful and I know I had fun making it.  And it’s made entirely from stuff I had on hand, and  lastly it's a surprise how much it appeals to me – I really like it!  Go figure.

I felt so pleased with Green Peace, as I call it, that last Friday I tried free creating again.   My niece and nephew (aged 6 and 10) were at my house and while my son Jonas and his cousin Karsten were playing video games, Aven and I went up to the sewing room.  She found some 2 ½ inch squares of really cute fabrics that were also freebies from QUILTCON and fell in love with them.   I told her to make any arrangement she wanted on the design wall, and I would show her how to sew them together.  She had so much fun with it!   (Her seams were pretty straight, too!)  And the result is well – so modern and I think, adorable! 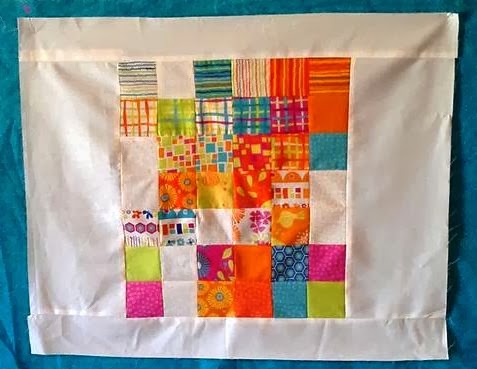 She decided to frame it in white, a result I love, and I’m trying to convince her to make it into a pillowcase, but she wants it to be a quilt, which is fine.  I guess I was just surprised by how much I liked this simple little rectangle made of squares. It’s really the fabric and colors that make it so cute.  At first I tried to stop Aven from putting white squares next to each other, but then I just decided to let her do it exactly the way she wanted, and it’s fine and I call it (appropos a six-year-old) "Missing Teeth."

From my recent experiences I (as usual) learned some things.  First, not to always be so invested in trying to create something “new” and “original.”  It’s okay just to play with color or put things together in a simple way – one can still end up with something really keen and likeable.  And second, not to have to have an outcome in mind, meaning a finished piece.  If I try something, and it doesn’t look good or I don’t like it, I can always “scrap” it and move on to something else.  Especially when I’m literally using fabric pieces that are either free or leftover from previous projects.


These two little experiences were so enjoyable, it made me change my mind about the scraps.  I was going to sell them for fifty cents at my spring garage sale, or donate them…but now I see their value.  I’m going to keep at least some of them - for futher experiments!  Maybe my little realization is my coming late to a party that many people have been enjoying for a long time – well, better late than never.  Now that I’m here, I’m stayin’ for a while!   Who knows, it could lead me to my best work yet!  One thing is certain – I’ll enjoy the ride wherever it takes me – whether it’s to the garbage can  - or someplace maybe a little less stinky.
Posted by the zen quilter at 6:25 PM