At the moment I’m working on a quilt for my son. You know, his high school graduation quilt…well - the one for his dorm room…okay, maybe it will be done by Christmas.  Heck, at this rate I’ll be lucky if I finish it before he graduates from collegeI  It took me a while to get an idea for it although I’ve had the fabrics for a while.  I wanted to reference his love for airplanes, but not too literally.  I finally got an idea a couple of months ago, which I sketched and had no time to develop. 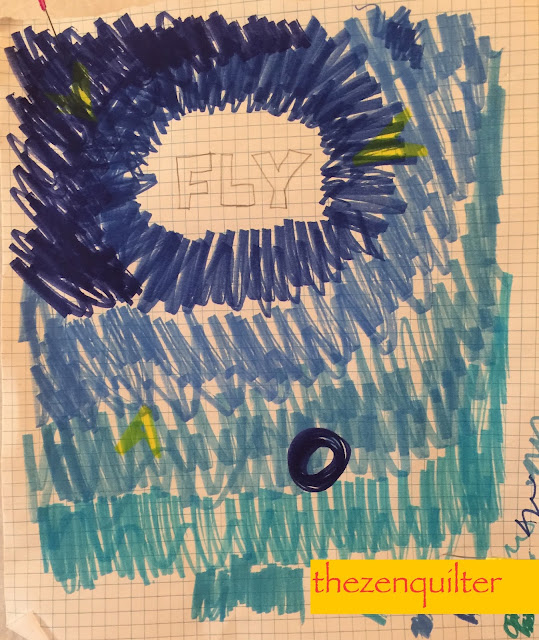 I kind of wish at the moment that I hadn’t  gotten this idea at all- because man, it’s killin’ me!  I’m wondering if perhaps I have cut off more than I can sew.

There are several reasons it’s so challenging. For one, I’m trying paper piecing, a technique which I know very little about. I mean, I get the general idea, but I am having so much trouble with it.  I thought the points would be perfect but it is not happening.  It seems perfect, but then when I sew it together,  it’s so - not.  So far I’ve had to pull stitches on every single square at least one time, but usually more than once.  I think partly that is because I’m probably doing something wrong (I just don’t know what!) and partly because of the other challenge - the dark background fabric.  It’s a beautiful fabric - Essex yarn-dyed cotton/linen blend.  While I really love the look of it, I hate sewing this piece with it - it’s way too stretchy for bias use despite my using buckets of starch on it. Too bad for me - it’s a done deal,  I’ve bought three yards of it and I’ve already made enough squares that I don’t want to start over, so I’ll have to stick with it - even if it does actually kill me(shoot a flaming arrow through me wrapped in a pile of gorgeous fabrics, please).

Originally I intended to buy Amy Garro’s Paper Pieced Modern before I began, but for the first time in a while I had some time to sew and I couldn’t stand waiting so I just went for it.  I’m right about now thinking that was a mistake.  I’m really hoping that it will get here soon, before my head explodes. (it’s way too late for my temper - that blew up the other day, unfortunately.)

I’m planning to make forty 9 x 12 squares, and I’m at the moment  only 10% there even though I’ve been working on it for at least seven days!  Not in a row, but Yikes!  That’s slow going, isn’t it?

One entire day was spent on the whole project design.

The patterns for the squares took one - no, two entire days (so far).  I've made eight different square designs.  I think I'll be able to mix and match them a little, so that should be enough variety.

Then it took me another entire day to make (gulp) one practice square!

But hey, I had a lot of problems and kinks to work out with it.  One day I actually made two entire squares and re-drew several of the squares, so I think I’m getting better…let’s hope so if I want to finish it before Jonas has his first child!

I sure hope the finished product will turn out the way I have it drawn, because I like the sketch. 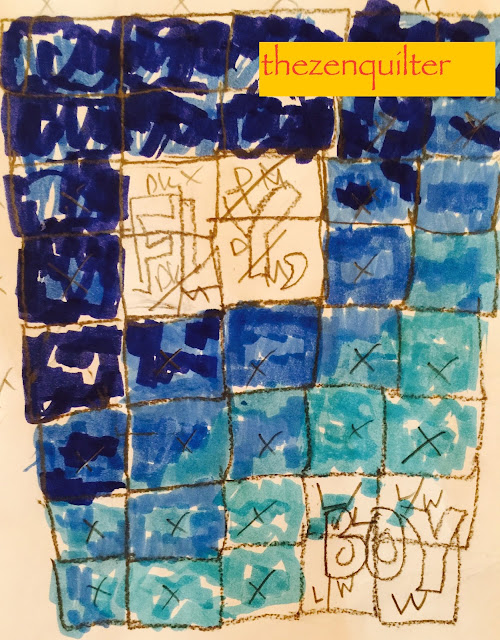 But at this point I have no way of knowing for certain if it will.  Oh well - at least it’ll be made with lots of love (not to mention swearing and tears!)  I’ll keep you posted.

Today I'm going to finally spend some time on WIP Wednesday over at Sew Fresh and Freshly Pieced.  So fun, I love seeing what people are doing..
Posted by the zen quilter at 10:41 AM