I Actually Had Time to Work in My Studio!

Can't take too long because it's past my bedtime already, but I so love linking up and checking out everyone's WIP's.  Of course I looked at all the quilts on the Blogger's Quilt Festival, done by the amazing Amy of Amy's Creative Side this week, so that was fun, too.

But I'm so thrilled because after almost three months of being unable to work in my studio due to other things, I actually had an entire day to sew this weekend, and have snatched a few hours in the last couple of days to work as well.  AND - I have something to show for it!  It's a new design, called "Prayer Kites." 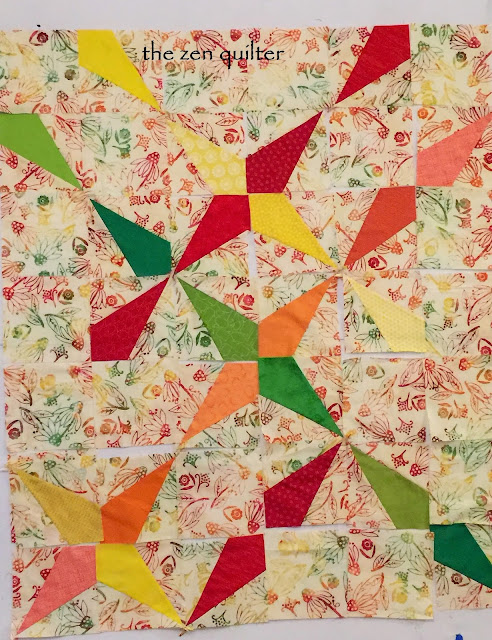 This quilt reminds of two things: One is the prayer flags that you see all over Tibet, because they are strung together and when they blow in the wind they sometimes fold over and look like kites.  And It also reminds me of some of those Mid-Century Modern designs with the stars and the lines and the bright citrus colors against a creamy background.  I plan to blog more about this piece when I'm not so tired.  There's still some work to do on it, but I have to say that I like it  - it will make a cheery throw, I think.  (Oh and don't worry, I caught that the greens in the middle were going the wrong direction BEFORE I sewed it together)

I have the squares sewn now, but don't have a photo.  Drop by tomorrow or Friday for more info on this - I had some - er - adventures putting it together!  See you all at WIP Wednesday at Freshly Pieced and Let's Bee Social
Posted by the zen quilter at 11:43 PM