You know how they say that if one has an idea, you can bet that it's already been thought of before.  There are so many people in the world and have been so many people before, that I imagine that's kind of true.  Then how can anything ever be original?

I've thought about this a great deal, because I know that I'm often inspired by other people's ideas, art, the design on a fence or wallpaper or whatever! I am often inspired by something I see in nature, too, Sometimes ideas that seem to come out of the blue are actually from somewhere I've been or something I've seen but I don't remember it consciously.  So when we talk about original design, I've come up with the following. Original design is something you didn't copy exactly from something else - a pattern, for example.  Although it may have been inspired in an obvious way by something else, you aren't just copying what's been done before in that you are creating it in a different medium, say from a painting to a quilt.

This piece, called "Magnetism," is an original design that came from an art deco design I saw.  I sketched the design, which was metallic against white, but as I started turning it into a quilt it morphed quickly into something quite different.  I actually blogged about this piece earlier, because I spent a lot of time getting it just right - I even had to take out a lot of the quilting I had done once I realized it didn't fit at all with the sensibility of the piece!  (See the blog titled "When is a Failure not a FAIL if you're interested.)

Anyway, the final result of all the planning, thinking, doing, ripping is this: 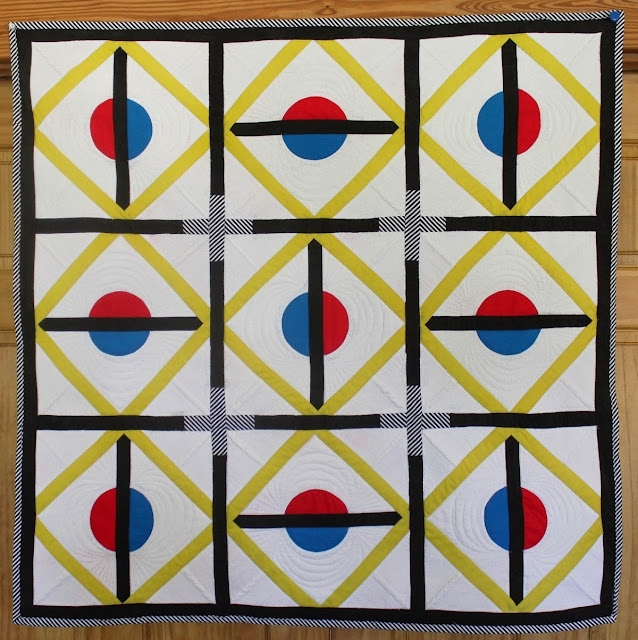 I definitely put a lot into this piece, but it was worth it, as I am so satisfied with the outcome now.  It's a testament to how much I wanted this piece to turn out that I was even rather zen during all the processes of changing and fiddling that needed to be done on it!  I made a table runner with the rejected squares that my little kitten Angus loves to sleep upon.

I'm entering it into Amy's Blogger's Quilt Festival  in - you guessed it - the original design category.

.  My thanks to Amy of Amy's Creative Side for her hard work and willingness to take so much time to put this together.  Can't wait to see all the beautiful creativity in the festival!!