The title of this blog may be misleading. OF COURSE I have works in progress!  Three to be exact.  But there is no progress being made on them at the moment, so they don't really count.

I would have been slaving away at quilting the hockey quilt for my friend Helen's son, but after I spent four hours (no that isn't a typo) on Monday sandwiching it, I left it on the floor and one of my (soon to be homeless) cats PEED on it!  (That isn't a typo either. Unfortunately.)  I wasn't about to un-sandwich it to wash it, after it took all afternoon to get it done, so I just took the offended part and rinsed it out and am letting it dry.   I think it had literally just happened because it didn't seem to have soaked in, so that's good (if you can say anything good about such a disgusting, annoying happening). Yes, I did curse like a sailor.  The good news is, it seems to have recovered - even my dog-like sense of smell can't smell the pee, and will be ready to quilt tomorrow.

I was really happy when I got it all together and I put it on my bed and it looked like this: 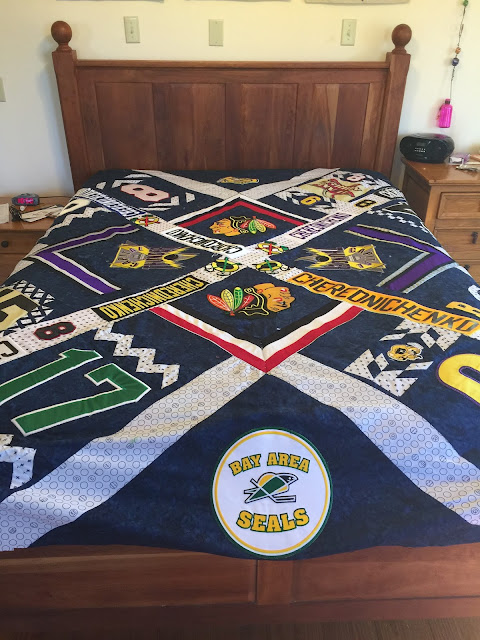 I did a happy dance.  But now: the QUILTING.  Should be a pretty decent challenge to quilt something that size and weight with all those raised appliqués on it...can't wait. (said in a Garfield the cat-like voice).

On an easier note, Mountain Majesty is complete.  I'm pretty pleased with it.  I wasn't sure about the yellow around the edge before I put it on, but I decided to take the chance anyway and I'm super glad I did.  It works. 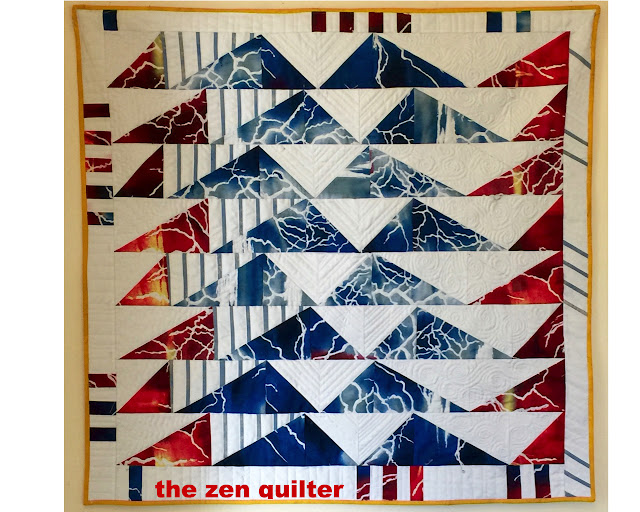 At least I think it does. 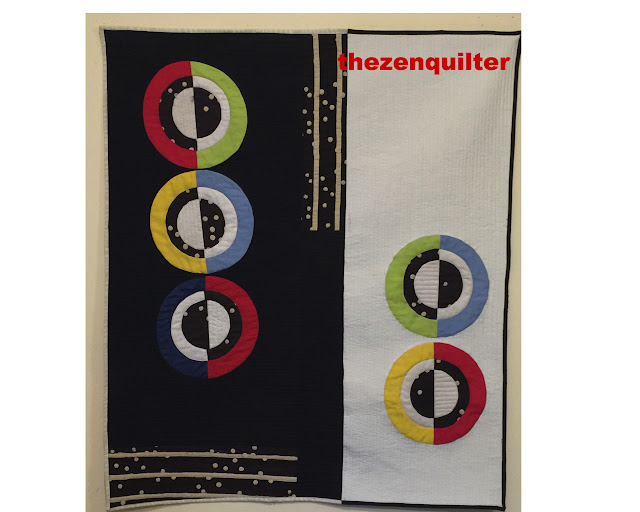 I did a BUNCH of straight line matchstick quilting on it that you can't really see in this shot.  The black side is horizontal and the white side is vertical.  Had some other ideas, but left it at that.

I'm about to be super busy, so you probably won't hear from me for a little while.  Lots of sewing and other stuff to do before the holidays.  I have so many blog ideas, but just so darn little time to write, it seems I can barely post on WIP Wednesdays lately, and that's it.  Maybe things will slow down in January a little.  See y'all around cyber space.

* That's "circles" in a Jersey accent.

Oh and today is my Prince Charming of a husband's birthday.  He is really the poi-fect guy for me! Love you Paul Wikander.