WIP Wednesday, and Knowing When to Change Something

This morning for some reason, I decided to make my first mini mini quilt.  I decided to do some improvising with HST's.  It was a lot of fun.  I'm pretty sure I'm going to do it again, because I like the results.  A lot.  Anyway, it took a lot longer than I was thinking it would.  Especially because when I thought I was finished, I wasn't.  I decided to cut the backing of the mini an inch or so larger and use it as the binding.  It went really well except, well - I'll let you look at the photo and you'll see what I mean:

So naturally I had to fix it.

Here's another example of something that wasn't working:

It had to be changed, and after I made the change I fell completely in love with the piece, so I know I made the right decision.

Then there is the plus quilt.  This afternoon I worked on quilting it.  I'm all done with the major squares and now I just need to do the white ones.  I like it a lot, but I'm wondering if I didn't over-do it - it has kind of an art deco feel to me, which wasn't what I was thinking about at all.   But in this case, I'm not gonna re-do.  Because even if that wasn't necessarily my original intent, I still like the result enough.  If I didn't, believe me, I'm stubborn enough to pull out every last part I don't like.  Even though there's a lot of quilting there it would be worth it to me, because if I don't like it now, I'll never like it. 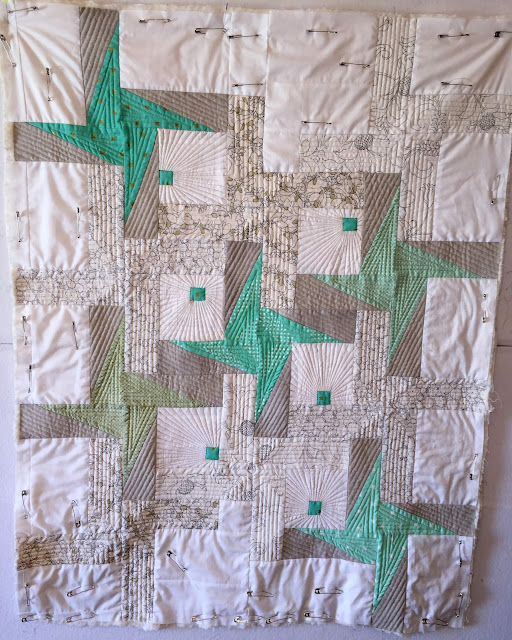 It seems as though I've made a realization today which is that it's a very important part of creating to know when to make changes and also, when to leave it as is.  I used to be in such a hurry to finish things that the thought of un-doing things made me, well, curse and complain at the least, but now I realize that more than finishing something, I want to do it right, and if it isn't, I'll go back and re-do it until I feel it is.  As Judi Madson of Green Fairy Quilts said once, it has to be my version of perfect.

My last WIP report is on the t-shirt quilt for Nikolai. Here is the first quadrant, almost complete.  It's turning out well, I think.  I may add a thin blue and white stripe all the way around the edge of the quilt when I'm done if I feel like I need more decoration.  I'm just kind of adding as I go, and so far it's working out just fine. 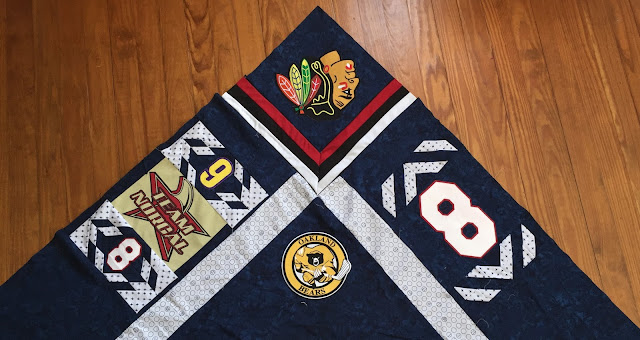 What about you guys - do you find yourself making a lot of changes as you go?  And do you feel like you've developed the skill of editing?  I think it's a great skill to have, not just in writing, but in creating and even in conversations, 'cause you know, sometimes it's good to know when to keep one's opinion to oneself.

Can't wait to see what everyone's up to..
Posted by the zen quilter at 6:45 PM