A couple of interesting lessons for me this week that I want to share:  First, on the link between creativity and being in the moment:  I just finished a wall hanging inspired by my week long foray into the tunnel of the Modern Quilt Guild website.  (I loved it in there – only my love for my family and need to work pulled me out, otherwise I might still be wandering around in there ooohing and aahhhing and getting generally very excited but accomplishing exactly nothing.  It’s a good place to visit for short periods, though – lots of inspiration.)

I was pretty excited about the wall hanging - it was much more minimalistic than other things I’ve been working on, but it had possibilities.  Then one day I sold two of my art pieces.  I was glad about this, but I quickly reminded myself that while helpful, that isn’t the reason I create and to keep being present and not focus on what may or may not happen in the future with it.  (Good discipline, Carrie!  Good job being present!)  I was not being externally motivated – good for me.
Well…I told  myself not to be external, but secretly (even I didn’t realize it) I was, and here’s how I know:  I fussed and cursed and got frustrated while I was working - much more than I have in a long time.  I felt impatient to be finished and my mind kept wandering to the next quilt I wanted to begin.  So there was little joy in the moment or presence while I worked – I wasn’t having much fun.

Secondly, when I did finish it, I felt – well, nothing.  I didn’t have a sense of peace or “rightness” or accomplishment I often feel when I finish something.  That feeling of ‘Yes, that’s it!’ never happened.  It just left me cold.  There’s nothing wrong with it – it’s fine technically, but I don’t like it that much, and I’m sure it’s because I lost touch with that creative vibe and became too wrapped up in the idea that I need to get more stuff out there as soon as possible because it might just sell.  In other words, I was focused on the outcome, not the doing, and the result is that I just don’t like this piece.  It’s too bad, too, because I spent a lot of time on it.


It wasn’t a total loss, though.  The good news is that I learned a little something  –  I realized how important it is to true creativity to not think too much – about anything, in fact, but especially about a possible outcome that may or may not ever happen again.  I realize that often in the past when I was trying to create I missed a lot of the fun, although I didn’t realize it at the time.  I was always so focused on the outcome – I wanted to finish too much - hence the cursing and fussing and gnashing of teeth.  (Well I’ll be damned -  here I thought I was just a naturally impatient, ill-tempered guttersnipe, and it was all just a matter of focus…although I still blame a little of it on hormones….there’s no getting around the fact that menopause completely sucks!)
So it turns out that being truly creative is actually a discipline !  (And here so many people think artists are un-disciplined.)  Yep, it takes a lot of discipline to actually do the work, but the more important discipline is to be fully awake to each thing you do while you are doing it – that’s where the enjoyment comes in, that’s where the fun comes in - and now I know for certain - it’s where the beauty comes in as well.


And no, I haven’t forgotten the other thing I was going to share – the first one was just rather long-winded. The second thought is that the universe is truly miraculous at giving one exactly what one needs exactly in the moment one needs it.  If not for the fact that one hour after I made some money on my art I went to the dentist and found out I have to have a root canal (to the tune of precisely the same amount I made on the sales), who knows how long it might have taken me to make the first realization?  I can only feel deeply grateful that a) it was an even trade, and b) for the time I’ve already saved in the future on things I might have wasted my time on because I was thinking too much about possible outcomes -Thanks, Karma!  J


(And while I may sound just the teensiest bit like I’m being ironic, I actually really am and do feel grateful – but still, it is  a little ironic, isn’t it?)

And just to keep myself honest, here is a picture of the quilt, called not-so-originally "Blocks of Color." 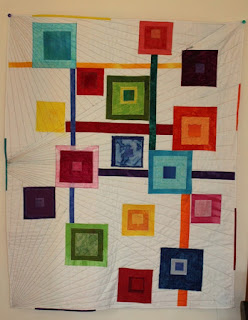